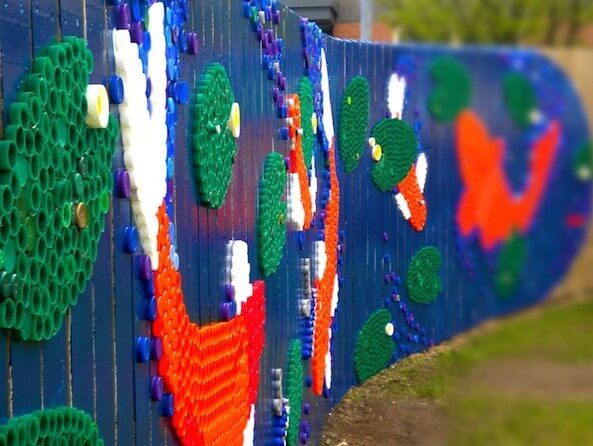 I received an email a couple weeks ago from artist James Melin, who wrote to me from across the pond in Ireland, a place that typically evokes lush and green rolling hills, pints of Guinness, and craggy cliffs that sit high above a wild seashore. What was revealed to me via attached photos was quite unexpected: upcycled art made from scraps of particle board, old rain boots, and bottle caps. Originally born in America, James relocated to Belfast with a teaching credential and construction background in hand. His joy of working with discarded and reused materials as well as working with groups of young people clearly inspired the following projects as described by the artist himself. Sláinte! Jim! The bottle cap mosaic was done at the children’s play area of a women’s center in West Belfast. Each bottle cap was pin nailed into the wooden fence. Thousands of bottle caps were used in this piece. The center is very happy with this koi design, and I plan to do more work with bottle caps in the future. I’ve read somewhere that these little pieces of plastic are second only to cigarette butts when it comes to the trash that washes up on beaches. I was doing some work for a friend cutting particle board to a certain size. When I was finished, I had all of these leftover pieces that were this strange quadrilateral shape. I thought they would look good put together in some way. My original plan was to paint the sides of each piece and leave the smooth faces of the boards alone. I had some spray paint left over from another job and decided to use it. Well, the effect on the rough side of the particle board was far cooler than anything I had originally anticipated! I plan to do a lot more of these! The rubber boots were graciously given to me by my mother – in – law to give to Cash for Clothing. I decided I would try to make them into something. I cut the soles off and formed a koi fish. I ended up selling this 3D art piece to a restaurant in Belfast and that inspired me to make more with the rest of the boot pieces I had left over! Right now they are all for sale and on display in a restaurant not far from Belfast. 5 Easy Steps to Prepping Your Garden & Greenery for Fall To Prime or Not to Prime: Refurbish Research at the ReStore 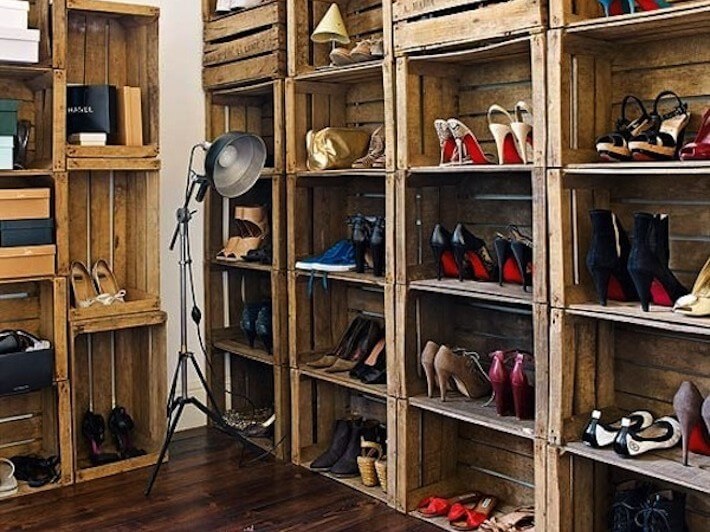